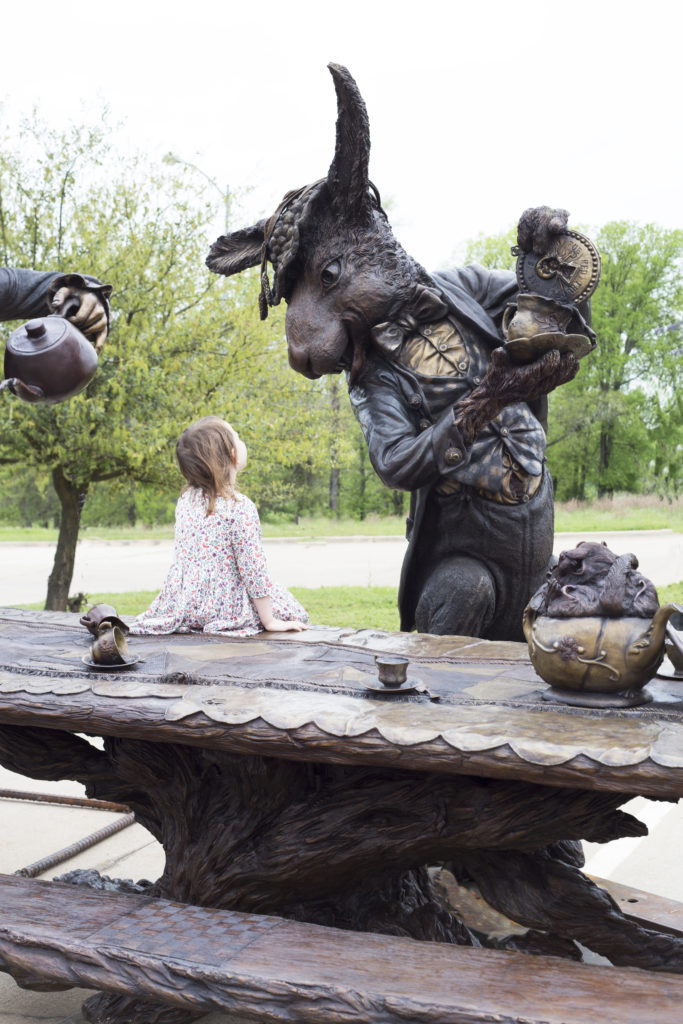 Evelyn’s Park Conservancy, the non-profit public-private partnership dedicated to the stewardship and improvement of Evelyn’s Park, is having its commissioned sculpture Move One Place On by local Houston artist, Bridgette Mongeon, installed on Monday, April 9 and Tuesday, April 10, 2018.

Kids and kids at heart will be able to grab a seat at Alice’s table, enjoy a picnic, gather in a communal way, and interact with the sculpture; the totality of the installation promises to create a larger-than-life experience for park visitors. 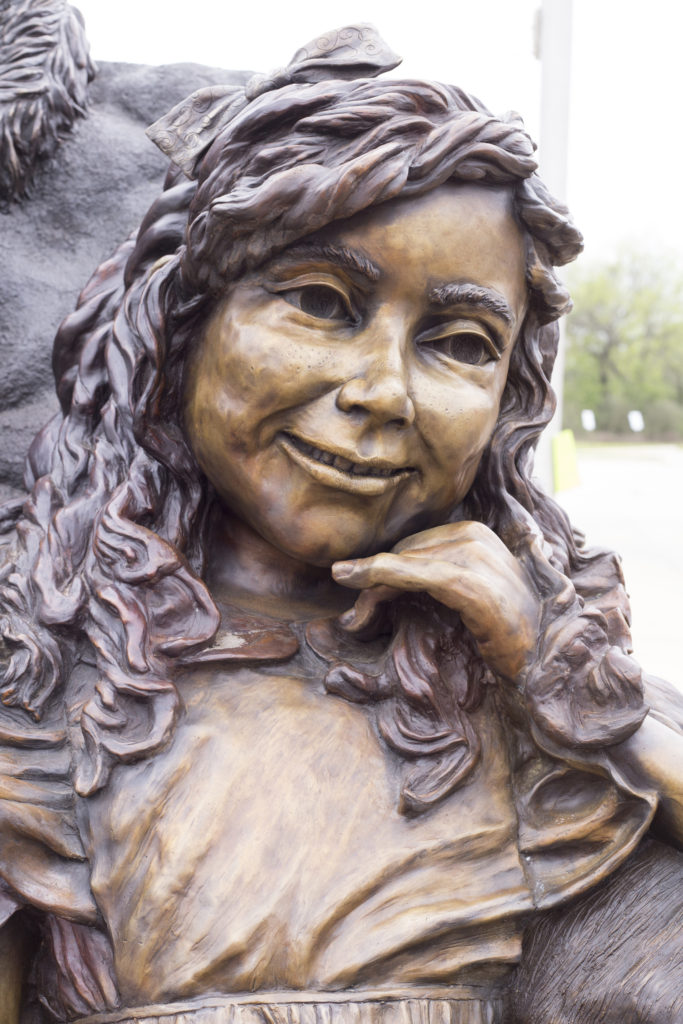 When the historic Teas Nursery closed in December 2009, The Jerry and Maury Rubenstein Foundation seized the opportunity to save a piece of Bellaire and Houston history by acquiring the five-acre site that is now Evelyn’s Park with the vision of maintaining a green space in the heart of the city. The Foundation commissioned the Alice in Wonderland sculpture in honor of the Rubensteins’ mother, Evelyn. The sculpture will inevitably become a community-gathering place for people of all ages to enjoy and share (just as Evelyn would have wanted).

The whimsical picnic table will make its official debut at the one-year Evelyn’s Park anniversary celebration on Saturday, April 21.

“We are thrilled to bring this gorgeous piece of art to Evelyn’s Park and know that the Move One Place On sculpture will become a destination for locals, tourists, and fans of the endearing story of Alice in Wonderland,” said Patricia King-Ritter, President of Evelyn’s Park Conservancy. She added, “Just as this classic story appeals to people of all ages, Evelyn’s Park will strive to do the same. The Rubenstein family commissioned this sculpture with the hope that families, friends, and neighbors will gather together and grab a seat at Alice’s table.”

The sculpture consists of a 10-foot table with The Dormouse configured within a teapot in similar fashion to the description in Alice’s Adventures in Wonderland. Three benches offer seating for guests, one of which possesses a built-in chessboard.

A nine-foot Mad Hatter flanks the 24-foot long sculpture on the left. He pushes out of his chair – which is complete with arms in the shape of a lion and unicorn, respectively, and feet of the chair outfitted in the shape of flamingos. The seat is unbalanced and topples over as the Hatter is positioned in a standing posture, gesturing to the end of the table and pouring tea. The March Hare sits on a stump at the center of the table, talking to the guests to his right while dipping a watch into his tea. Alice looks on from a large overstuffed chair containing the Cheshire Cat. The covered (and coveted) seat next to Alice boasts plenty of room. 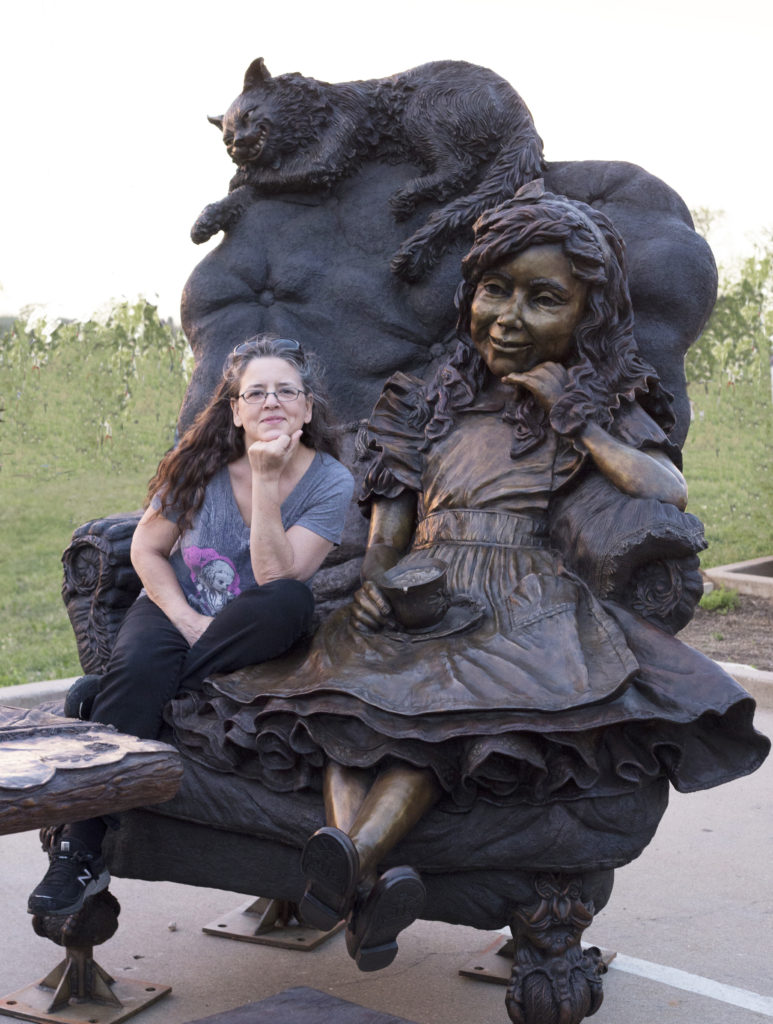 “I created this sculpture in such a way that each character is interacting with an empty place,” explained artist Bridgette Mongeon. She added, “The sculpture will seat six to eight additional guests, allowing families to bring a picnic and join the tea party. The monumental figures of Alice, the March Hare, Cheshire Cat, Dormouse and Mad Hatter are waiting for famlies to enhance the iconic scenery.”

“The title of the sculpture, Move One Place On, is what the Mad Hatter beckons at the tea party. I hope Evelyn’s Park visitors will develop a tradition of shouting In honor of the 150th anniversary of Lewis Carroll’s Alice in Wonderland – celebrated in 2015 when the sculpture was first commissioned – Mongeon has created and hidden 150 different elements within the scene,” Mongeon continued. 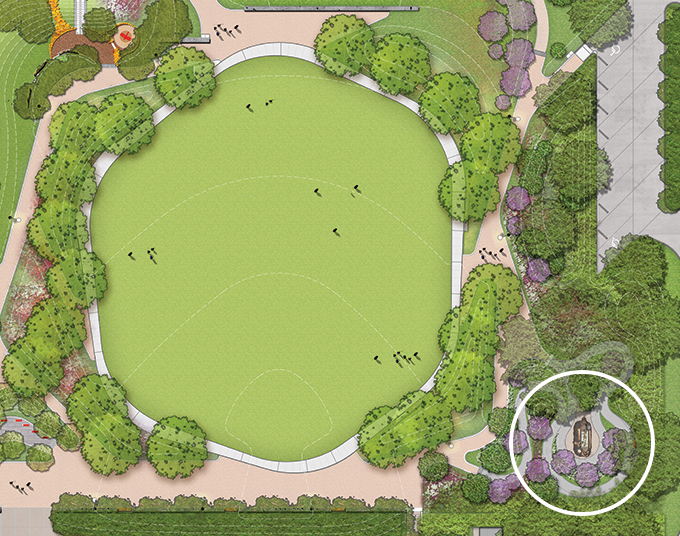 The hidden elements represent an additional way that the sculpture invites the community to interact at the park and are akin to a treasure hunt. The treasure hunt begins at the dedication plaque, which is shaped as a storybook balanced on a tree trunk. Visitors can glance up to the top of the storybook and see the feet of a small white rabbit jumping down a hole. As park goers walk around the stump, they will see a cutaway from the hole where another very small Alice is also falling. This dedication plaque begins the quest to locate the 150 hidden facets.

To learn more about the treasure hunt and to receive hints about the 150 hidden items in the sculpture, visit Mongeon’s website at www.alicesculpture.com or follow her on Facebook at www.facebook.com/FindingAliceSculpture.

FUN FACTS ON MOVE ONE PLACE ON

The Move One Place On sculpture weighs in at nearly 6,000 lbs. and was completed by Deep in The Heart Foundry in Bastrop, Texas. Now, with the sculpture complete, it will travel through Texas on an open-bed trailer from Bastrop to Bellaire, where Alice and her friends will meet their final resting place in Evelyn’s Memorial Garden within Evelyn’s Park – a spot destined to become one of the most coveted recreational experiences in the State of Texas.