Bright Star, the new musical from Grammy®, Emmy® and Academy Award®-winning Steve Martin and Grammy Award®-winning Edie Brickell, is coming to Houston from Theatre Under The Stars beginning March 13 through March 25 at the Hobby Center for the Performing Arts. 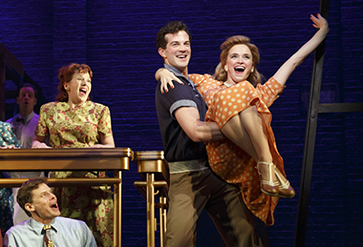 Inspired by a real event, this original musical tells a sweeping tale of love and redemption set against the rich backdrop of the American South in the 1920s and ’40s. Propelled by an ensemble of onstage musicians and dancers, the story unfolds as a rich tapestry of deep emotion, beautiful melodies and powerfully moving performances. Bright Star – as refreshingly genuine as it is daringly hopeful-is a “shining achievement” (The New York Times).

The Grammy Nominated original cast recording of Bright Star is now available everywhere, and charted on five different Billboard lists in its first week of wide release. The cast album from Ghostlight Records placed at #1 on the Top Current Blue Grass Albums chart, #2 on the Top Broadway chart, #5 on the Americana/Folk Albums chart, as well as hitting the Top 100 on the Billboard Top Albums chart and Top 200 on the Overall Digital Albums chart. The album is produced by the legendary, multi-Grammy Award- winning producer, manager and musician Peter Asher.

To purchase tickets, visit www.TUTS.com, call the Theatre Under The Stars Box Office at 713-558-8887, or come by the box office in person at 800 Bagby Street, Monday through Friday from 10am to 6pm or Saturday and Sunday from 11am to 4pm.