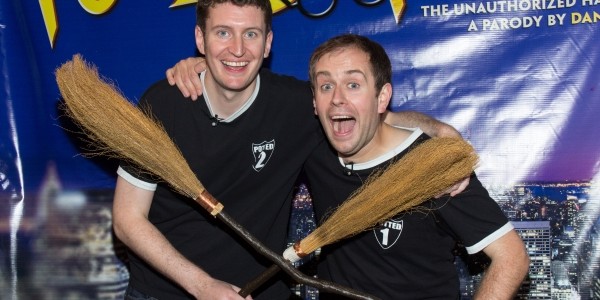 The entire Harry Potter story in just 70 minutes is a possibility with Potted Potter: The Unauthorized Harry Experience, A Parody by Dan and Jeff.

Two-time Olivier Award-nominated actors, Daniel Clarkson and Jefferson Turner wrote Potted Potter, which has played out to sold-out houses all over the world. Considered extremely funny, the show features all of Hogwarts’ favorite characters, a special appearance from a fire-breathing dragon, endless costumes, brilliant songs, ridiculous props and a generous helping of Hogwarts magic.

Potted Potter is slated for a limited two-week engagement from October 27 to November 8 in Zilkha Hall at The Hobby Center at 800 Bagby. The show is designed for ages six and up.

Starvox Entertainment and Potted Productions introduced the hilarious show to North American audiences in Toronto at the Panasonic Theatre. After a record-breaking run in Toronto, Potted Potter headed to New York City and played a hit, off-Broadway run at The Little Shubert Theater. The show has since returned to Toronto and New York City as part of its third record-breaking North American tour.

If you are the dedicated fan who camped outside a bookstore awaiting the release of Harry Potter and the Deathly Hallows, or even if you don’t know what a Horcrux and a Hufflepuff is, the comedy, magic and mayhem of Potted Potter are sure to enthrall and entertain.

For more details, go to www.pottedpotter.com.