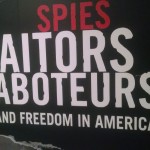 The exhibit, Spies, Traitors, Saboteurs: Fear and Freedom in America, has arrived at the Houston Museum of Natural Science bringing a historic perspective on acts of terror that have taken place on American soil.

The Houston Museum of Natural Science will host Spies, Traitors, Saboteurs through January 18, 2016 and is a creation of the International Spy Museum.

Spies, Traitors, Saboteurs reveals 9 major events and periods in U.S. history when Americans were threatened by enemies within its borders. The exhibit details how the government and public responded and illustrates the corresponding evolution of U.S. counterintelligence and homeland security efforts. It also examines the challenge of securing the nation without compromising the civil liberties upon which it was founded.

Included is a timeline that traces over 80 acts of terror that have taken place in the U.S. from 1776 to today, including the Revolutionary War plot to kidnap George Washington, the events of Bloody Kansas prior to the Civil War, John Brown’s Raid on Harpers Ferry, the 1960s Church bombings in the South, and the attacks on the World Trade Center in 2001.

These dramatic moments in U.S. history represent times when Americans felt threatened within their own borders leading to legislation and/or new counterintelligence measures and provoked debate about protecting both citizens and civil liberties.

See up close and personal these important events and their corresponding artifacts:

➢  July 30, 1916 — Manhattan Hit by Massive Explosions in New York Harbor: German secret agents, aided by American collaborators, blew up a munitions depot in New York Harbor, showering Manhattan and the Statue of Liberty with shrapnel and debris. Acts of German sabotage on America soil like this contributed to America’s entry into World War I and inspired the passage of the 1918 Espionage Act still in effect today and the growth of the Federal Bureau of Investigation. 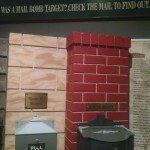 When the home of Attorney General A. Mitchell Palmer was bombed by an anarchist and plots for more bombings were revealed, both the public and the government clamored for tighter law enforcement and more restrictive legislation for immigrants, resulting in the roundups, deportations, and public outrage associated with the now infamous “Palmer Raids.”

➢  Aug. 8, 1925 — 30,000  Ku Klux Klan Members Parade Down Pennsylvania Avenue:  The nation’s oldest hate group, the Ku Klux Klan, has risen three times in the nation’s history. Each time, the group changed, evolving from small vigilante circles to huge violent organizations. They began inflicting terror on former slaves after the Civil War and grew into a politically powerful organization of four million that expanded its targets to include immigrants, Jews, and Catholics in the 1920s. In the 1960s, they began attacking African Americans and civil rights workers. Today, a diminished Klan is only one among many white supremacist groups. 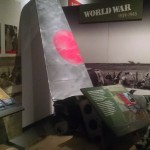 A Japanese pilot returning from the Pearl Harbor attack crash-landed on the Hawaiian Island of Nihau, and with the support of a Japanese American, took hostages and terrorized the community. This incident, little remembered today, perpetuated fears about Japanese Americans. Fears that ultimately led to the unprecedented incarceration of thousands.

➢ April 1945 — The Kremlin Launch one of the first Cold War Attacks against the U.S.:  Near the end of WWII, the Kremlin harshly condemned American Communists for softening their commitment to a worldwide communist revolution. The Communist Party of the United States snapped to action, ousting its moderate leader and reestablishing itself as a highly militant and subversive organization, fueling America’s fears that American Communists would become Stalin’s tool for the overthrow of the U.S. government.

➢ March 1, 1971 — Radical Group Explodes Bomb in the U.S. Capitol: Protests over the war in Vietnam and civil rights turned violent during the “days of rage,” and extremist groups, such as the Weather Underground and the Black Liberation Army, took action. 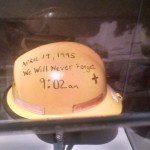 ➢ Beyond September 11th – Terrorism Today: In the aftermath of Sept. 11, 2001, initiatives by the U.S. government to root out terrorist elements in the country have irrevocably changed the lives of Americans.

Historic photographs, themed environments, interactive displays, film, artifacts and videos are include throughout the exhibit. Some of the highlights include: 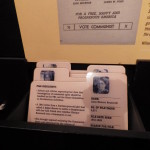 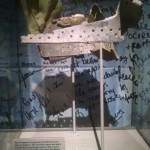 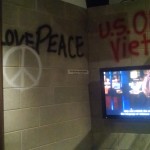 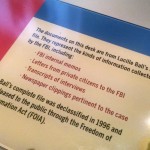 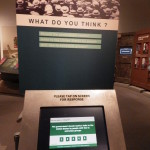