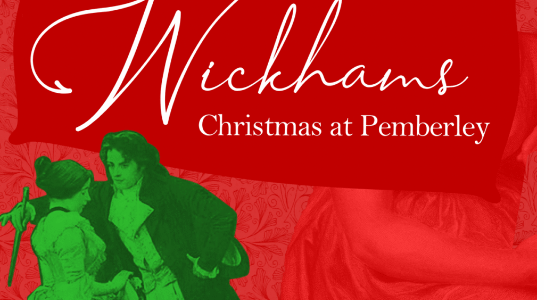 The Wickhams: Christmas at Pemberley opens at Main Street Theater in Rice Village

The Wickhams: Christmas at Pemberley, By Lauren Gunderson and Margot Melcon, will be staged now through December 18, 2018

Regency romance is back for the holidays at Main Street Theater (MST) with Lauren Gunderson and Margot Melcon’s The Wickhams: Christmas at Pemberley—a companion piece to the duo’s Miss Bennet: Christmas at Pemberley. Both are set in the world of Jane Austen’s popular novel, Pride and Prejudice, and MST’s productions of both plays have become holiday traditions for many here in Houston.

About The Wickhams: Christmas at Pemberley

As the events of Miss Bennet unfold upstairs at Pemberley, the servants below stairs find themselves in the midst of a different holiday scandal. An unwelcome visitor has stumbled into the hall in the middle of the night—Mr. Darcy’s nemesis and Lydia’s incorrigible husband, Mr. Wickham! The bustling housekeeper, Mrs. Reynolds, Cassie, the resilient new serving girl, and Brian, the helplessly romantic groomsman, must each balance their holiday preparations with keeping Wickham confined. But before long, everything reaches a boiling point, festivities spiral into chaos, and the truth comes to light! An utterly delightful holiday tale.

*Spencer Plachy, who plays Mr. Darcy in the production, just wrapped up 12+ months on Disney’s The Lion King North American tour in one of the lead roles as Scar. Plachy is originally from Houston and has acted on and off with Main Street Theater for years, going back to 2002 (Li’l Abner, The Three-Cornered Hat). He was MST’s original Mr. Darcy in their 2017 production of Miss Bennet: Christmas at Pemberley and is now back as Mr. Darcy in The Wickhams: Christmas at Pemberley.

Plachy’s wife, Laura Kaldis, plays his wife in the production (Elizabeth Bennet Darcy) as she did in our 2017 production of Miss Bennet. Laura is originally from Houston as well. Miss Bennet was such a hit in 2017, Main Street brought it back in 2018, and Laura was able to come back (they were living in NYC at the time) to reprise her role. Spencer had been cast as Scar in the interim and so could not join the production again. Both actors played the Darcys virtually during COVID lockdown in MST’s readings of both plays.

Now in its 47th Season, Main Street Theater provides live theater experiences for all ages. The MainStage produces intellectually and emotionally engaging professional productions for adults in the heart of the Rice Village and operates under an Actors’ Equity Association union contract; the Theater for Youth produces engaging productions based on children’s literature for families and school groups, both in-house and on tour around Texas, reaching over 140,000 audience members each season; and we offer Education and Outreach programs on-site and at satellite locations around the Greater Houston area for youth aged 4 – high school.  We work out of 2 facilities: our Rice Village home on Times. Blvd., and as part of the MATCH (Midtown Arts & Theater Center Houston) on Main Street.

Main Street Theater is a member of Theatre Communications Group (TCG), the national service organization for not-for-profit theaters, of Theatre for Young Audiences/USA (formerly ASSITEJ), the world theatre network of theatre for children and young people, and a founding member of Houston Arts Partners. Main Street Theater is funded in part by grants from the City of Houston through the Houston Arts Alliance, and the Texas Commission on the Arts.