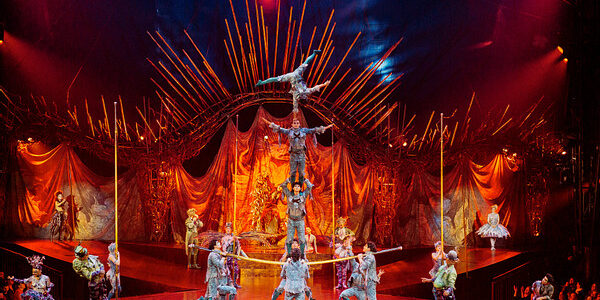 Alegría – an all-time classic reimagined in a new light, to perform three additional weeks over the Holidays through January 2nd, 2022

Cirque du Soleil is celebrating its return in Houston by adding three weeks of performances to the local engagement of Alegría – its most iconic production. Now from November 13th to January 2nd, audiences are invited under the Big Top at Sam Houston Race Park to experience the pure theatrical magic of Alegría; an entirely-redesigned fan favorite.

“We’ve had this extraordinary situation where the pandemic forced us to stop performances of Alegría in Houston in March 2020”, says Michael Smith, Artistic Director for Cirque du Soleil. “As we are remounting, we are using it as an opportunity to rethink some elements of the show, make changes and bring in news acts. From the adversity, we’ve created and opportunity.”

For its grand return under the Big Top after its 20-month hiatus, Alegría will feature new exciting acrobatics – including a mind-blowing Flying Trapeze act – and an enhanced live score to continue its legacy of spreading joy and escapism to audiences worldwide.

Undeniably the most iconic Cirque du Soleil production, Alegría is an all-time classic reimagined for a new generation to fall in love with. An uplifting immersive experience, Alegría whisks audiences away to a mystical world sprinkled with visual poetry and acrobatic extravagance.

At the heart of a once-glorious kingdom that has lost its king, Alegría witnesses the power struggle at play between the old order and a young movement yearning for hope and renewal.

IN A NEW LIGHT

First premiered in 1994, Alegría (‘joy’ in Spanish) has become one of the most beloved Cirque du Soleil shows by mesmerizing over 14 million spectators in 255 cities across 40 countries in over 19 years of touring. Its Grammy-nominated soundtrack – featuring the iconic title track “Alegría” – is still the most purchased and streamed Cirque du Soleil album to date.

In 2019, in celebration of its 25th anniversary, Alegría was restaged under the Big Top in a whole new light, ensuring that all its components – stage direction, music, acrobatics, sets, costumes, lighting & makeup designs – would be as inspiring for today’s audiences as they were at the time of the original creation. Reenergized by a cast of 53 acrobats, clowns, musicians and singers, Alegría remains timeless and imbued with a joyous magical feeling.

The revival of Alegría is the 44th original production created by Cirque du Soleil since 1984, and its 19th presented under the Big Top.