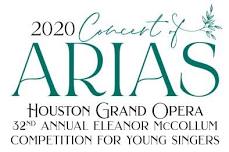 Houston Grand Opera (HGO) has selected the finalists for the 32nd annual Eleanor McCollum Competition for Young Singers’ Concert of Arias, to be presented in the Wortham Theater Center on Feb. 7 at 7 p.m.

The program will also be streamed live on Facebook and YouTube for all to enjoy, inviting viewers to cast their votes for the Online Viewers’ Choice Award.

This year’s finalists are:

The competition and its final round, the Concert of Arias, are held annually to identify candidates for HGO’s internationally acclaimed Studio program, which nurtures young artists who have the potential for major careers in opera. Past prize winners who are now artists on the international stage include Jamie Barton, Joyce DiDonato, Ana María Martínez, Ryan McKinny, and Tamara Wilson.

Now in its 32nd year, the competition received over 650 applications from singers around the world. Auditions were conducted in November and December 2019.

After careful consideration, eight semifinalists were selected for the final round of the prestigious competition in Houston. The selected finalists have the opportunity to learn more about HGO and work with HGO music staff leading up to the Concert of Arias, in which they will perform two arias each, competing for up to $10,000 in cash prizes. Finalists will be accompanied by Kirill Kuzmin, HGO assistant conductor.

For the sixth year, world-renowned soprano and HGO Studio alumna Martínez will select a finalist to receive her Encouragement Award. Audience members can also participate in the evening’s events when they cast their votes for the Audience Choice Award. Proceeds from Concert of Arias 2020 benefit the Eleanor McCollum Competition for Young Singers and the Houston Grand Opera Studio.

This is the fourth year the Concert of Arias will be streamed live on Facebook and YouTube. The livestream will be hosted by HGO Studio alumna and 2007 Concert of Arias third-place winner Jamie Barton.

MURRELLA PARTON: SOPRANO–Originally from Seymour, Tennessee, Murrella Parton was a 2019 semifinalist in the Metropolitan Opera National Council Auditions, a finalist for the Lyric Opera of Chicago Ryan Opera Center, received the second prize and soprano prize in the Young Patronesses of the Opera National Voice Competition, and is a semifinalist for the 2020 Vero Beach Rising Stars Competition. In recent years, she was awarded second prize in the Cooper-Bing Vocal Competition and was the recipient of the Italo Tajo Award, the Andrew White Award, and the Seybold-Russell Award at the University of Cincinnati College-Conservatory of Music Opera Scholarship Competition. Previous performances include Older Alyce in Glory Denied, First Lady in Die Zauberflöte, Sheva/Hannah in Enemies, A Love Story, Nella in Gianni Schicchi, Ginevra in Ariodante, Elettra in Idomeneo, Sylviane in The Merry Widow, and Fiordiligi in Così fan tutte. She is a graduate of the University of Tennessee Knoxville and the University of Cincinnati College-Conservatory of Music.

RACHEL SHAUGHNESSY: SOPRANO—A native of Traverse City, Michigan, Rachel Shaughnessy is currently pursuing her Master’s in Vocal Performance at Rice University’s Shepherd School of Music. She received her Bachelor of Music in Vocal Performance at Michigan State University where she performed as Marcellina in Mozart’s Le nozze di Figaro, Charlotte in Robert Nelson’s A Room with a View, and Amastre in Handel’s Serse. Rachel recently performed Mrs. Johannes “Ma” Zegner in Missy Mazzoli’s Proving Up at Rice University. She has studied at Houston Grand Opera’s Young Artists Vocal Academy and as a Young Artist with SongFest at Colburn. In the summer of 2018, Rachel joined Wolf Trap Opera as a Studio Artist, where she covered Elettra in Mozart’s Idomeneo. She returned to Wolf Trap in the summer of 2019 to cover the title role in Strauss’ Ariadne auf Naxos and Diamatine in Gluck’s L’île de Merlin.

SUN-LY PIERCE: MEZZO- SOPRANO—Originally from Clinton, New York, Chinese American mezzo-soprano Sun-Ly Pierce recently completed the Graduate Vocal Arts Program at the Bard College Conservatory of Music and holds a Bachelor’s Degree in Vocal Performance from the Eastman School of Music. As a winner of the Marilyn Horne Song Competition, Pierce will perform on an international recital tour with pianist Chien-Lin Lu. The tour includes appearances in Santa Barbara, Chicago, New York City, and London and will feature the premiere of a new song cycle written by two-time Grammy Award winning composer, Jennifer Higdon. This past fall, Pierce joined the Broad Street Orchestra as Dorinda in Handel’s Acis and Galatea.  She returns to the Music Academy of the West this summer as a 2020 Vocal Fellow, performing the role of L’enfant in Ravel’s L’enfant et les sortilèges and covering Hänsel in Humperdinck’s Hänsel und Gretel.

ISABEL SIGNORET: MEZZO- SOPRANO-–A Miami native, Isabel Signoret is currently pursuing her master’s degree at The Shepherd School of Music at Rice University, studying with Dr. Stephen King and is a graduate of HGO’s Young Artists Vocal Academy (YAVA). Upcoming performances include Sesto in Mozart’s La Clemenza di Tito at The Shepherd School. Previous roles include Diana/Giove in Cavalli’s La Calisto and L’enfant in Ravel’s L’enfant et les sortilèges. Signoret was a Studio Artist at Wolf Trap Opera where she covered the role of Concepción in Ravel’s L’heure espagnole. She covered the role of Rosina in Rossini’s Il barbiere di Siviglia with both Wolf Trap Opera and with the Aspen Music Festival, where she studied in the summer of 2018. She received her Bachelor’s Degree in Voice from the University of Michigan.

ANGEL ROMERO: TENOR—Houston native Angel Romero holds a Bachelor of Music degree from Houston Baptist University and recently completed his master’s degree at Yale University under the tutelage of Richard and Doris Cross. His recent opera performances include Tamino in The Magic Flute (Yale University), Monostatos in The Magic Flute, and Ruiz in Il Trovatore (Central City Opera). On the concert stage, he was the tenor soloist in Beethoven’s Symphony No. 9 with the Yale Philharmonia under the baton of Marin Alsop. In the summer of 2019, Romero joined the Santa Fe Opera as a young artist. This season he will cover the role of Arcadio in Florencia en el Amazonas and perform the roles of Oronte in Alcina, Remendado in Carmen, and Flavio in Norma as a resident artist with Pittsburgh Opera.

LAUREANO QUANT: BASS-BARITONE—Colombian native Laureano Quant is a second-year master’s degree candidate at Manhattan School of Music under the tutelage of James Morris. Previous credits include Figaro in Mercadante’s I due Figaro, Maguire in Picker’s Emmeline, Zurga in Bizet’s Les pêcheurs de perles, Vittorio/Pensionante in Rota’s I due timidi, Demetrius in Britten’s A Midsummer Night’s Dream, and the Captain and Prince Ragotsky in Bernstein’s Candide. He was the first prize winner in Premio de Canto Ciudad de Bogotá in 2018 and second prize winner in the National Voice Competition in 2016, hosted by Bogotá Philharmonic Orchestra. Quant has performed as a soloist in the major theaters in Colombia. He has participated in several masterclasses, including the Royal Opera House Jette Parker YAP Latin American Tour, SongFest, and masterclasses hosted by Teatro Colon de Bogotá. Last summer, he joined Merola Opera Program in the Schwabacher Summer Concert. Quant is a recipient of the Mae Zenke Orvis Opera Scholarship.

CORY MCGEE: BASS—Hailing from Stafford, Virginia, Cory McGee is currently pursuing his Master of Music degree at Rice University’s Shepherd School of Music. This past summer, he joined Santa Fe Opera as an apprentice artist, portraying the role of the Gardener in Ruder’s The Thirteenth Child. He recently performed the role of Sodbuster in The Shepherd School of Music’s production of Missy Mazzoli’s Proving Up. Previous roles include Elder Ott in Carlisle Floyd’s Susannah, La Voce in Mozart’s Idomeneo, and Ranger Nat in Wolf Trap’s commissioned children’s opera, David Hanlon’s Listen, Wilhelmina!. McGee was also a soloist in Bernstein at 100 – A Celebration, at Wolf Trap’s Filene Center. Recent engagements include Sylvano in Cavalli’s La Calisto (Rice University), the title role of Le nozze di Figaro and Pandolfe in Massenet’s Cendrillon (Oberlin Opera Theater), and Leporello in Don Giovanni (Oberlin in Italy).