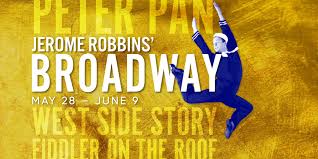 Filled with mesmerizing production numbers from some of Robbins’ biggest hits, including West Side Story, Gypsy, On the Town, Peter Pan, The King and I and Fiddler on the Roof, this monumental TUTS premiere is the crown jewel of the musical theatre company’s 50th Anniversary Season.

“With a sizable cast of 47 incredibly talented performers, we will be able to fully realize the iconic moments from the golden age of musical theatre that are featured in Jerome Robbins’ Broadway,” said Artistic Director Dan Knechtges. “Jerome Robbins shaped and changed the history of musical theatre forever, and we’re thrilled to celebrate his legacy as the crown-jewel of our 50th Anniversary Season.”

Leading off the amazing cast of 47 brilliant performers is Jeffrey Schecter.

Jerome Robbins Broadway, will be directed by Cynthia Onrubia with production supervision by Chris Bailey. Music supervision by Michael Horsley, with music direction by Stephen W. Jones and additional choreography by Harrison Beal.

Tickets start at just $30, and are available online at www.TUTS.com, or by contacting the TUTS Box Office by phone at (713) 558-8887 or in person by visiting the Box Office located at 800 Bagby Street.