“DREAM BIG: Engineering Our World” kicks off national Engineers Week in Houston on the Giant Screen on February 17th 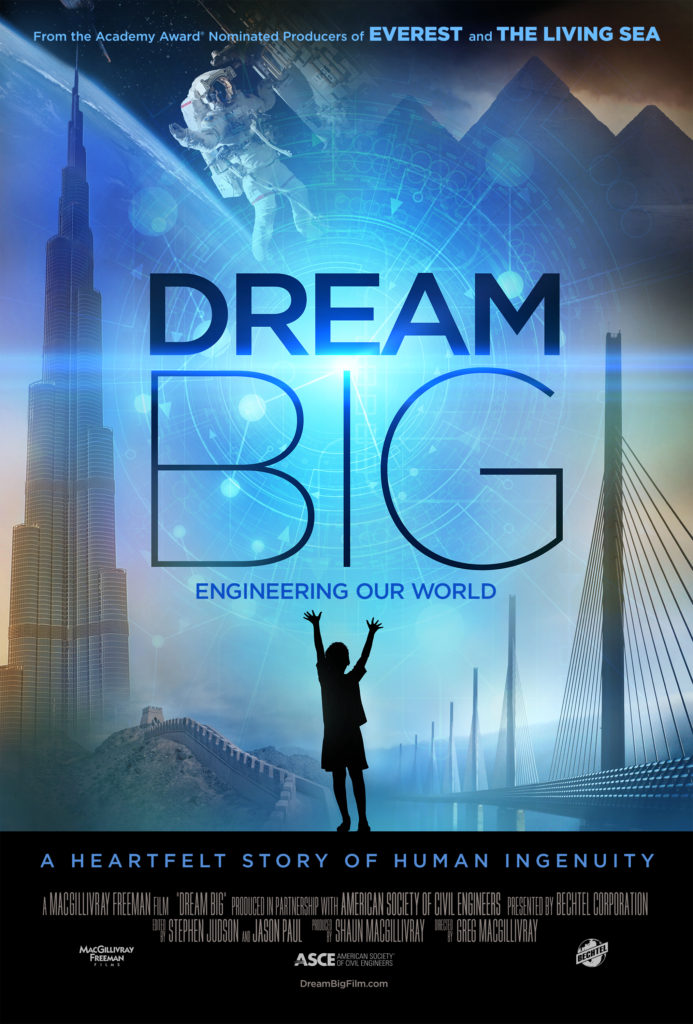 Giant screen movie-goers will soar above the world’s tallest bridge and travel at speeds approaching 700 mph when MacGillivray Freeman’s new 3D film,DREAM BIG: Engineering Our World, produced in partnership with American Society of Civil Engineers and presented by Bechtel Corporation, arrives in the Giant Screen Theatre at the Houston Museum of Natural Science on February 17 as a kick-off to national Engineers Week.

Narrated by Academy Award® winner Jeff Bridges, the film celebrates human ingenuity and innovation while offering an exciting new perspective on what it means to be an engineer. View the trailer.

“HMNS is a major science learning center with over a half million school children visiting annually. With that in mind, I knew we had to show this movie given the increasing importance of STEM education,” said Charlotte Brohi, VP of Film Programming and Distribution at HMNS. “DREAM BIG is an ideal way to expose and ignite students’ interest in STEM subjects and careers. More importantly, the film does a superb job spotlighting a woman that has made major contributions in the field. It will become more evident to young girls how creative, fulfilling and enjoyable a STEM career can be.”

With its inspiring human stories—including a young woman engineer building bridges in undeveloped countries and an underprivileged high school robotics team that succeeds against all odds—the movie reveals the compassion and creativity that drive engineers to create better lives for people and a more sustainable future for us all.

DREAM BIG is the first giant screen project of its kind to promote the educational STEM movement (Science, Technology, Engineering and Math).

“Parents and teachers are looking for ways to turn kids on to science and engineering,” says director Greg MacGillivray, a two-time Academy Award nominee and chairman of MacGillivray Freeman Films. “With DREAM BIG, we wanted to bring something new to that effort with an entertaining, visually spectacular film full of stirring human stories that reveal the impact engineers have on our society.  We hope it energizes kids of all ages, especially girls, to think about engineering as a meaningful way to help others and leave a positive mark on the world.”

MacGillivray Freeman Films and its partners at ASCE and Bechtel have produced educational materials to go with the film and are providing funding for programs at museums and science centers such as Engineering Festivals and Girls Night Out.

Some of the targeted programming is meant to introduce middle and high-school girls to dynamic women engineer role models to encourage their interest in engineering careers.  Also available are 50 hands-on engineering activities, educational videos, lesson plans for grades K-12 and other engineering-themed events.  These educational components are hosted on the educational websitewww.DiscoverE.org/dreambig.