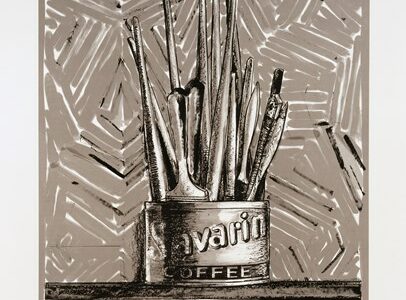 ‘Jasper Johns: 100 Variations on a Theme’ marks first presentation of the artist’s 2015 monoprint series, originally commissioned for his 2017 catalogue raisonné

This month, the Museum of Fine Arts, Houston will debut Jasper Johns’s series of 100 monoprints in the exhibition, Jasper Johns: 100 Variations on a Theme.

Originally created by the artist in 2015 with the intention of accompanying his Catalogue Raisonné of Paintings and Sculptures, published in 2017 by the Wildenstein Plattner Institute, the monoprint series will be on view in Houston September 29, 2019 through February 16, 2020 before traveling on to the Museum Barberini in Potsdam, Germany.

“This extraordinary suite of unique prints allows us to look back at the whole of Jasper Johns’s career,” commented MFAH Director, Gary Tinterow. “Their visual language expresses the many autobiographical details that have been so important to his identity as an artist.”

“This series provides the opportunity to see Johns’s creative process at work, as he manipulates the imagery in a playful and spontaneous manner. Each print informs the next” said Dena M. Woodall, associate curator of prints and drawings at the MFAH. “We are delighted to share Johns’s monoprint series for the first time with our audience in Houston.”

ABOUT JASPER JOHNS & HIS ART

Beginning in the early 1950s, Jasper Johns painted flags, targets, alphabets, and other everyday objects, creating a visual vocabulary that has recurred in his art for the nearly six decades since. At a time when abstraction was at its height, Johns’s selection of ordinary objects as his subject matter was a radical departure that quickly established him as one of America’s most influential artists. Jasper Johns: 100 Variations on a Theme exemplifies Johns’s innovation, displaying a series of 100 monoprints that incorporate elements from throughout his career.

As a prolific printmaker, Johns has worked with every technique, exploring the creative potential of each. Though printmaking is characteristically known for its ability to create a repeatable image, monotype and monoprint methods are known for their uniqueness: monotypes are typically made by applying viscous ink onto a smooth, nonabsorbent, unmarked metal or plastic plate, while monoprints use a plate with some fixed, repeatable carved, etched or engraved lines. The plate is then topped with paper and run through the press.

For Johns, monotypes and monoprints are placed in the same category because of their changeability in printing. Both are unique during the printing process, leaving behind one strong impression that cannot be replicated exactly.

Johns created this series of 100 monoprints in 2015, over the course of ten days in his Connecticut studio. The artist used an experimental intaglio plate—related to the 2007 etching titled Within—as the basis for the monoprint.

Reworking the plate numerous times, Johns added an etched imprint of his hand and symbols of American Sign Language (ASL) and proceeded to transform the image 100 times.

Each print informs the next, forming a narrative chain anchored by reoccurring elements from throughout his work: handprints, stenciled numbers, the alphabet, ASL symbols, and the string from his Catenary series of 2001. Johns also creatively wove the word raisonné into each print, using both letters and ASL symbols.

Other works on paper by Johns, including the artist’s Savarin (1977–81), Untitled (Red, Yellow, Blue), and Land’s End (1979) from the Museum’s collection and private collections, will be presented alongside the monoprint series to give context to the artist’s recurring themes and motifs.

For tickets and more information, go to www.mfah.org/exhibitions/jasper-johns-100-variations-on-a-theme.